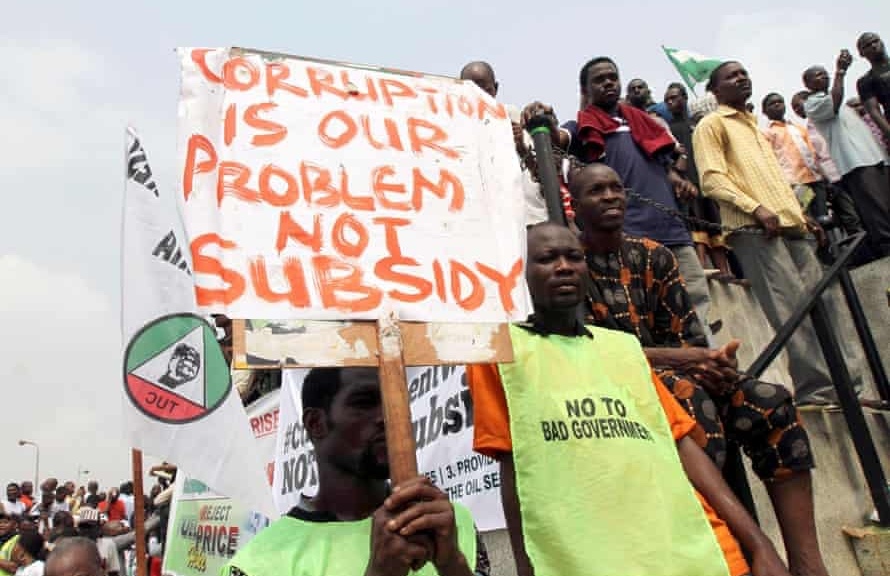 It is known as the resource curse: assets that should bring wealth and stability but instead lead to corruption and poverty. And for Nigeria, oil is the culprit.

In Nigeria oil has been more of a curse than a blessing. Weak institutions of state and poor governance in managing the vast revenues have led the country to fail to realise its full potential in a textbook example of what academics know as the “resource curse”.

First coined by Prof Richard Auty in 1994, the term refers to the inability of nations to use their windfall wealth to improve their population’s lot and bolster their economies. The rich natural resources bring corruption and poverty to a nation, rather than positive economic development and, counterintuitively, these countries end up with lower growth and development than those without natural resources.

The subject of extensive research, the resource curse, or “paradox of plenty”, points to an inverse relationshipwhere wealth brings a detrimental impact. Nigeria – the largest oil producer in Africa, the sixth-largest global exporter, holds the tenth-largest proven oil reserve in the world – is arguably such a “cursed” nation.

Dependent on their natural resource exports, these countries have on average, lower growth rates, lower levels of human development, and more inequality and poverty. They also have been found to have worse institutions and more conflict than resource-poor economies.

It arises predominantly due to poor political governance and weak institutions, coming from the distinct phenomena around oil exploitation rather than possession – and is shaped by the multinationals, national and foreign governments, the foreign financiers and investors, alongside the structures of states and private actors in oil exporting countries.

Resource wealth can have a devastating impact. Oil-exporting nations such as Nigeria, Venezuela, Angola and DRC have seen livelihoods and economies devastated, but there have been many countries throughout history, such as Norway, Canada and Botswana who have bucked the curse through strong state management and institutions that can stand against corruption.

This is crucial, because the key thing the resource curse is indicative of is corruption: a global phenomenon that is the single greatest obstacle to economic and social development, significantly so in less-developed countries. Worldwide, an estimated $2tn is siphoned away annually by corruption. This amount could eradicate poverty, educate all the world’s children, cure malaria and bridge the global infrastructure gap.

As defined by Transparency International, corruption is an “abuse of entrusted power for personal or private gain.” In 1996, the World Bank’s then president James D Wolfensohn called it a cancer and challenged all countries to strive for transparency and accountability to combat the pernicious impact of corruption on society, defining the consequences as redirecting resources from the poor to the wealthy, inflating business costs, discouraging foreign direct investment (FDI), draining public expenditure, misdirecting aid and undermining equitable national development.

Corruption erodes the integrity of people and institutions. A synthesis of social, political and economic forces, it disempowers sovereign states, undermines democratic institutions and contributes to instability fuelled by the distrust and resentment of citizens. It attacks democracy by distorting electoral processes, perverting the rule of law and building new bureaucratic hurdles whose only reason for existing is to solicit bribes.

Numerous reasons are behind corruption – self-interest, fear, greed and desire for power – but its consequences are always the same, enduring and deleterious.

To absorb an influx of petro-dollars is a complex issue for any nation. Countries with these windfalls struggle to responsibly process the excess liquidity. Often they initiate large, capital-intensive projects without meaningful due diligence or feasibility studies, sacrificing wise investment. Expenditure on lesser prioritised projects takes precedence. They accelerate existing projects accompanied by lavish expenditure. Then, faced with rising inflation as a result of unmatched productivity, they race to absorb the liquidity and therefore relax financial discipline and propriety. The combined effect of these factors leads to the appreciation of the currency, which hastens the worsening performance of the economy and renders the non-oil sectors uncompetitive as exchange rates soar. This particular phenomenon, sometimes know as the “Dutch disease”, resulted in the near demise of the non-oil sectors in the Netherlands.

Studies have shown that following an oil boom, an imbalance results as the non-oil sectors are left underdeveloped. As demand rises for capital and labour, the booming oil sector draws away those same factors from essential but less-lucrative sectors, such as agriculture, leaving them enfeebled. The windfall, having created a concomitant abundance and ensuing vast revenues, higher wages, and better returns on investments, leads to administrations finding themselves in new territory. Incompetence and inexperience in managing state finances creates higher incentives to attract corruption.

Newfound wealth creates expectations by citizens and demands for resources increase, not just from state bodies but also from civil society. The middle class demands more social spending, unions demand higher wages for the same jobs, and the unemployed demand the creation of jobs. Bureaucracies are formed and quickly become ineffective or incompetent, contributing to accumulating foreign debt and operating at trade deficits.

An economic trap or “rentier state” evolves. The state earns most or all its total revenue from the rents paid by foreign individuals, companies or governments. Non-oil sectors shrink, causing spiralling inflation, imports increasing in quantity and costs, wasteful expenditure on political vanity projects, subsidies and welfare programmes to counter increased cost of living and the depletion of foreign exchange.

With astute management and determination other countries have beaten the resource curse and steered their economies to success. So far, Nigeria has failed in much of its population’s eyes. Whether it is fated to become a failed state, only time will tell.

Kenneth Mohammed, MA Corruption and Governance, The Centre for the Study of Corruption at the University of Sussex, is a senior adviser at Intelligent Sanctuary